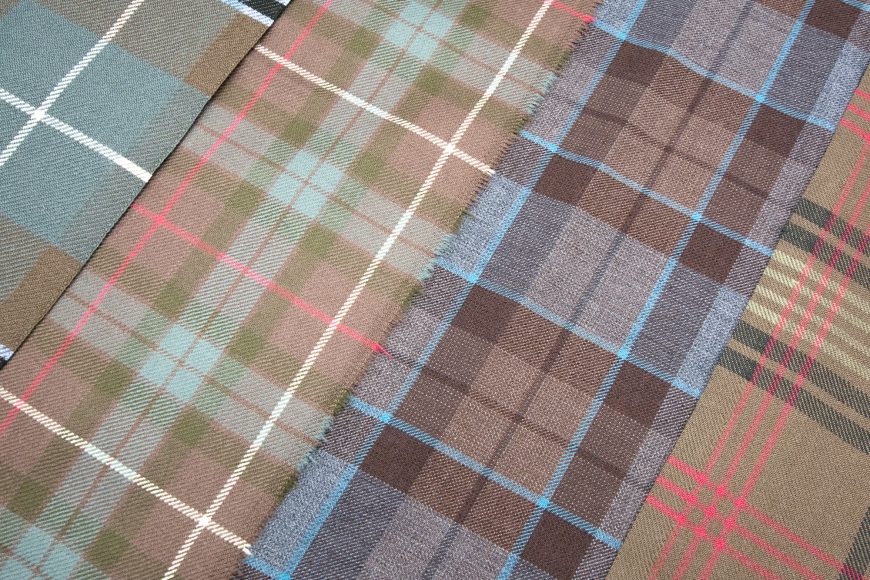 The story behind Outlander tartans

The story behind Outlander tartans

Who hasn’t heard (if not seen) the Starz TV Show Outlander? (if you haven’t, don’t run away, you don’t need to know Outlander to keep reading this post. 🙂 )
The show, based on a series of books written by Diana Gabaldon from 1991 first aired in 2014.  It follows the story of Claire Randall, a combat nurse from 1945 who is mysteriously swept back in time in 1743. This is where she encounters a Scottish Highlander, Jamie Fraser, and gets involved in the last Jacobite rising led by Bonnie Prince Charlie.
When I first watched the first season back in 2015, I was still living in France, but was already very fond of Scotland and had fantastic memories of my visits here. So I watched it out of curiosity, and fell for it very quickly!
And as a hobbyist costume maker, what I first loved from the first few episodes was the costumes. While it is widely acknowledged by experts in historical fashion and reenactment that the costumes are not (exactly) historically accurate, they certainly have a lot of elements inspired by 18th (and 20th!) century fashion and traditional highlandwear. Especially in the first two seasons where you can see a lot of tartan worn on screen.
But to begin with…

Initially, it referred to the type of cloth that was worn by Highlanders that was spun, dyed, woven and fashioned locally, rather than to its pattern, or to any notions of kinship. The exact origin of the word is still being questioned. The French word “tiretaine” or “tertaine”, which described a coarse blend of linen and wool is often mentioned. But other theories are based on Old Spanish, or Gaelic words. In any case, this type of design is common to many cultures around the world and can be traced back to prehistoric times. In Scotland, the earliest surviving example is the so-called Falkirk sett, which dates from the 3rd century AD.

It is now defined by the Scottish Register of Tartans Act (2008) Section 2: ‘A tartan is a design which is capable of being woven consisting of two or more alternating coloured stripes which combine vertically and horizontally to form a repeated chequered pattern.’ The tartan pattern is traditionally known as the sett of the tartan.
Now, the question is, how have they used tartans in the Outlander TV show?

The main “Outlander tartan” pattern is made of brown and blue-grey blocks and stripes, and has two additional variations. One of them has fine yellow and red stripes throughout the pattern, being the “Fraser” tartan, worn for the first time by Sam Heughan for his wedding. And the other one has additionnal light blue stripes is being worn by characters of clan Mackenzie (Dougal, Colum and others!) at Castle Leoch. But while Mackenzie and Fraser are both real Scottish clans with existing tartans, these tartans were not used throughout the show. And there is a very good reason for that: there is no mention of “clan tartans” as such, before the publication of the Vestiarium Scoticum, in 1842!

There are still a lot of uncertainties surrounding the early days of Scottish tartans, but most scholars agree that instead of “clan tartans”, tartans colours and patterns woven and worn before 1745 were mostly based on what plants and minerals were available locally to create natural dyes. This is what the show costume designer Terry Dresbach decided to go for, and chose quite earthy, muted colours that could have been obtained using local natural resources.

Here are a few examples of some of the Mackenzie and Fraser tartans registered and still woven today (but more exist!) :

If you want to learn more about the clan tartans as we know them today, how and when they were registered, I highly recommend you to read Emma Wilkinson’s fantastic post on her blog, A life in Tartan, about the Vestiarium Scoticum, a very important artefact in the story of tartan in Scotland. A great read for anyone wishing to get a deeper understanding of Scottish tartan history.

In Claire’s wardrobe though, some existing tartans were used, mostly during the first two seasons. For example, the cloak she wears on several occasions in the first season is lined with a heavyweight Douglas weathered tartan, which has lovely faded olive and brown colours, contrasted with white, navy and light blue stripes. It is very subtle, as it is only seen on a few shots where the inner part of the hood, or the lining of the main part of the cloak are showing.  My guess would be that regardless of which “clan tartan” this particular tartan is today, the costume designer would have picked it because of its muted, earthy, natural colours, that she probably assumed would have been possible to produce with what was available locally.

In the 4th episode of the first season, a clan Gathering is being organised at Castle Leoch, during which Jamie and other Mackenzie clansmen come to pledge allegiance to their chief, Colum Mackenzie. During the celebrations, she wears a beautiful dress made with an existing tartan: Ross hunting weathered. Again, the colours are quite similar to other tartans used on other costumes, with an additional splash of red that make the dress look quite stunning.

In some episodes of the first two seasons, Claire also wears some of the tartans that were designed for the show. For example, after she has been rescued by Jamie Fraser from a trial, in which she was accused to be a witch, she wears Jamie’s own great kilt, wrapped around her and tied at the waist with Jamie’s belt. Also, in season 2, she wears a another of the Outlander tartans, black and brown this time, wrapped around her, as she is walking down the street of Cranesmuir, near Castle Leoch.

Other tartans seen in Outlander

In the second season of the show, just before the battle of Prestonpans, first significant battle of the Jacobite rising, of 1745, Bonnie Prince Charlie, played by Andrew Gower, is wearing a striking red and black tartan with yellow stripes, which I identify as the very recognizable MacQueen tartan.
In an interview from June 2016, Terry Dresbach explained that she designed this costume to reproduce a portrait commissioned by the Prince. I believe it would be this one, painted around 1750 by William Mosman.

When my partner and I decided to make Outlander costumes replicas for ourselves back in 2016, we did a lot of research about 18th century fashion, highlandwear and tartans. Five of the tartans worn on the show were designed specifically for it and registered on the Scottish register of tartan. They were (and still are) woven in Scotland, by Ingles Buchan. The fabric of three of these designs can be bought by the yard from the Celtic Croft (along with other licensed products) if you live in the USA or Canada.

But because it was almost twice as expensive as an existing clan tartan available to buy in Scotland, we decided to make some research to find the closest existing tartan, that we could use to reproduce Jamie’s great kilt (Féileadh Mòr, in Gaelic). We did various research online, on the Scottish register of tartan, on Scottish mills’ websites, as well as in books that we have. We considered several options that were fairly similar in terms of colours and pattern, and ended up choosing to use a Mackay weathered tartan, as it was the closest to the one on screen, as well as the one we personally liked best. You can see below a few pictures of us in our fully self made  costumes taken last in 2019 at Midhope Castle, standing for Lallybroch, in the show.

But other existing tartans were really similar in terms of colours, to the one designed for Outlander. Mostly “weathered” tartans, which colour palette look more faded, as if the cloth had been exposed to the elements. Here are a few examples below of existing tartans with a similar look from Lochcarron of Scotland, that we initially considered before.

The series of books then the show have had tremendous success all over the world, especially across the pond (but I can testify that there are lots of fans in France as well 😉 ). With over 28 millions books sold, (according to Diana Gabaldon’s facebook post dating from 2017), and 67 episodes, we can safely say that the series has put Scotland and Scottish heritage, or what is shown of it, in the spotlight.

Tourism in Scotland has seen a massive increase of foreign visitors, some of them being influenced in their destination choice by Outlander. Some filming locations have seen their visitors numbers increasing massively between 2013 and 2017. For example, Doune Castle has seen a total increase of 226,52%, as detailed in Visit Scotland’s document detailing The Outlander Effect & tourism.

When I worked for Historic Environment Scotland at Edinburgh Castle back in 2018, I had a lot of visitors coming to me and asking for “Fraser clan” or “Mackenzie clan” brooches or tartans. Among them, many visitors from the US or Canada also told me that since they had watched the show, they were very interested in finding out more about their Scottish ancestors, some of them even trying to trace them back as far as they could. When they knew that their ancestors were from a specific clan or family, they felt the deep need to find a physical connection, which was quite often to buy an item made of that clan’s tartan.

In the show, both existing tartans (that would have been registered almost a century after the historical facts depicted in the story) and original tartans, designed specifically for Outlander, were worn as part of the characters’ wardrobe. For all these tartans, the costume team chose to go for natural, muted colours that reflect the natural landscapes of Scotland and the resources that would have been available to produce dyes.

Outlander, despite being a fiction in which a lot of artistic liberties were taken in its way of depicting Scottish History, folklore and period garment, has definitely had an impact on the representation of Scotland and its heritage among people who read the books or watched the show. And just like Gaelic language, tartan is definitely an aspect of Scottish heritage which continues to capture the imagination of people around the globe.

On a more personal note, I can safely say that Atelier Escapades might not have existed as it does, without the fascination that I have for this quite unique cloth that is tartan, and the great pleasure that I have each time I visit Lochcarron of Scotland in the Scottish Borders, since I first did back in 2017.

Textile lover and sewing addict living in Edinburgh. Committed to promote and support Scottish craftsmanship by creating handmade textile items and writing about my Scottish escapades.

Any cookies that may not be particularly necessary for the website to function and is used specifically to collect user personal data via analytics, ads, other embedded contents are termed as non-necessary cookies. It is mandatory to procure user consent prior to running these cookies on your website.